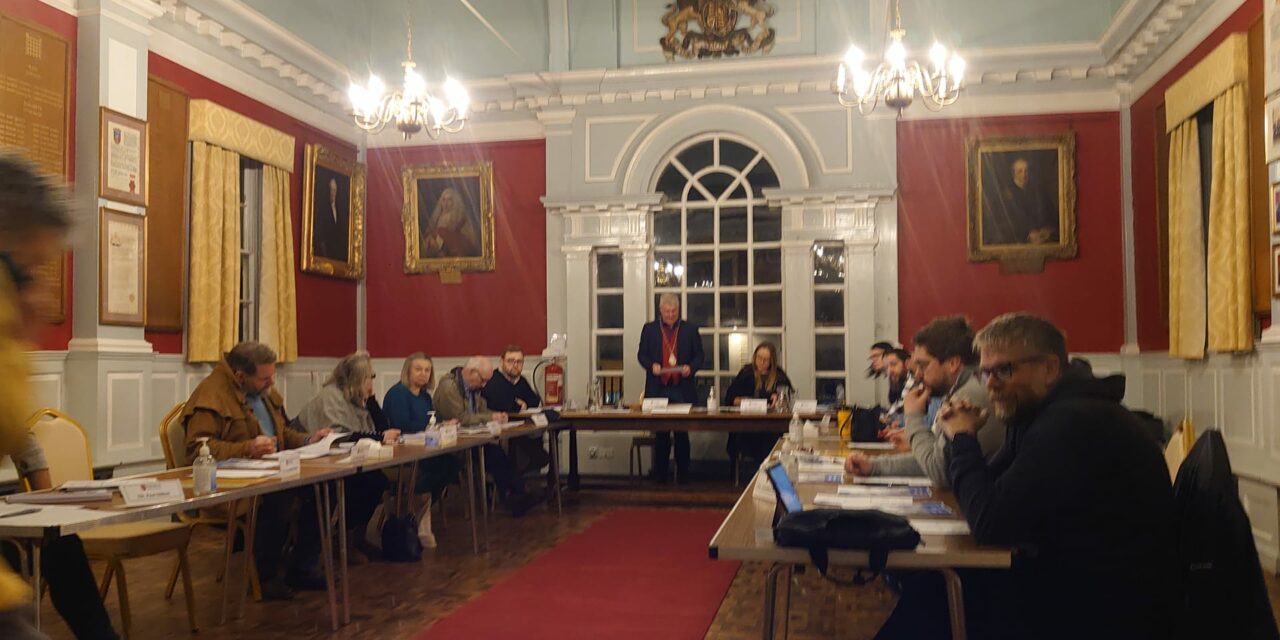 It’s Valentine’s Day and there is love, if not in the air, then being squelched underfoot in a very soggy Wallingford Town Square as we join the Town Council meeting in the Town Hall. The Agenda for this meeting can be found on the WTC website here.

We commmenced the meeting full of vim and vigour at 19:02, kicking off with the Mayor’s Communications, 15 councillors / staff, three members of the public and ourselves being present.

Following a couple of apologies, and some declarations of interest, Mayor Marcus spoke regarding the upcoming Mayoral elections, which we can look forward to in May. Marcus expressed his intentions to canvas Councillors  to judge their intentions.

Moving quickly on to accepting prior minutes (accepted), the meeting continued apace with some general confirmation of actions scheduled from previous meetings. 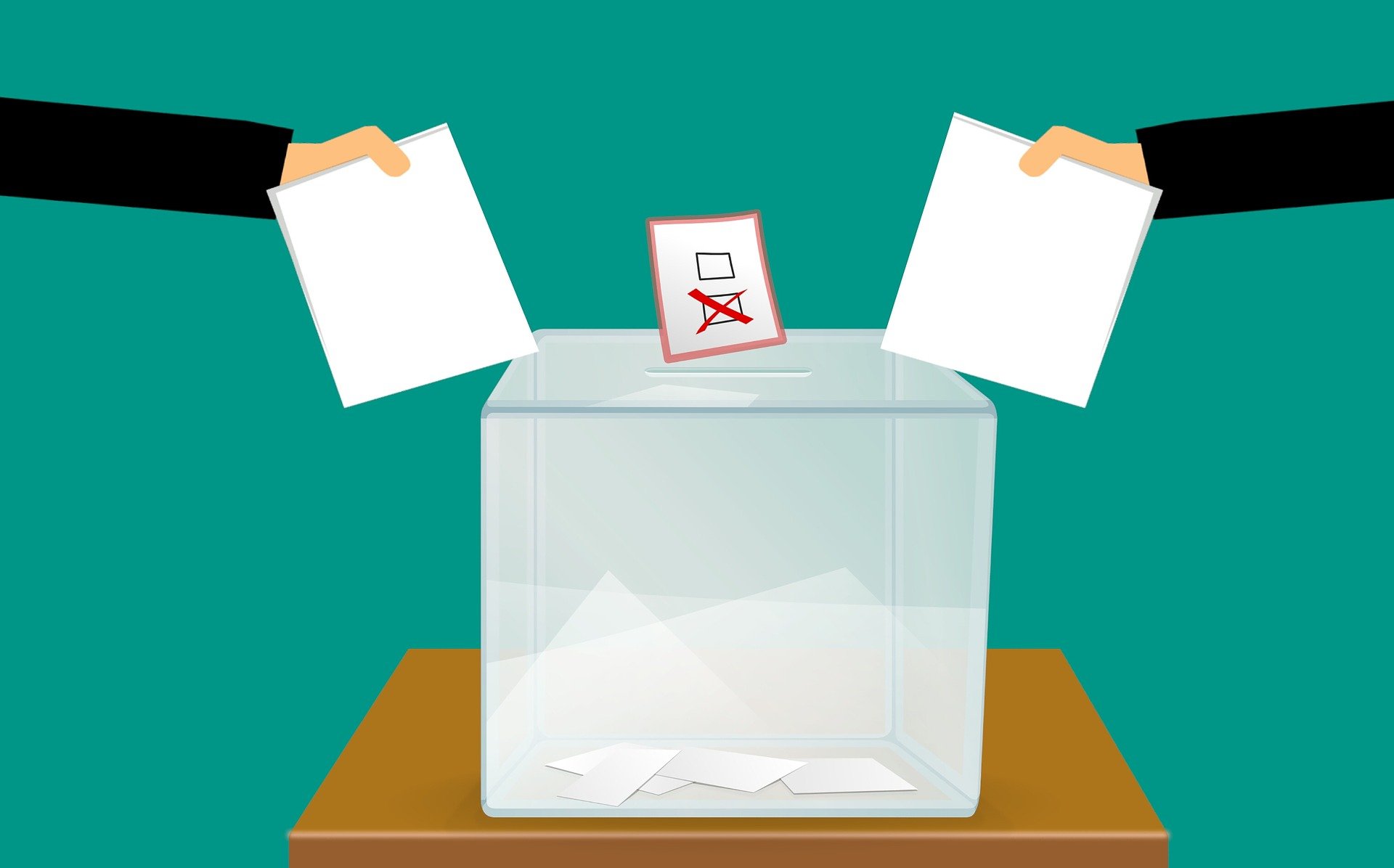 Having crossed the Ts, we moved on to public participation. Sue Roberts, the District Councillor, gave her report in person, speaking regarding the moving forward of a tree planting plan in the Radnor Road / Green area.

Sue also mentioned the granting of £150,000 from the SODC budget to improve the river bank side, allowing further operations of the Wallingford Accessible Boat Club. The Cllr further spoke regarding the required budget to meet the previously agreed climate targets – quoting an estimate of £11m.

Following was none other than ourselves, presenting the date of our FM launch, and inviting Councillors to come and visit our new studio in April to inspect our progress. 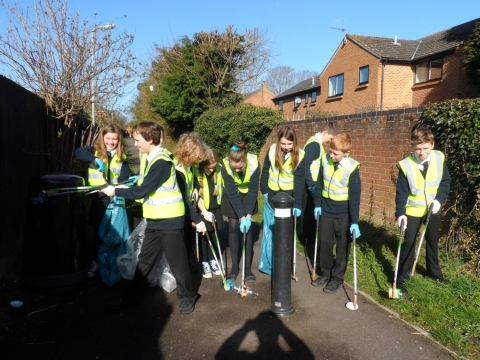 Following on, we move to the matter of Internal Audit Reports – the Finance and Properties committee having previously suggested the adoption of the Audit. The council moved to accept the Audit without comment, which was passed.

A mere 17 minutes in, we move to the 2022 calendar. This was to include the Andrew & Wilding Memorial, as well as bringing some other formal meetings within their required time frames.

The litter pick was advertised as the 12th March, with Cllr Steve adding to meet at Comrades Club between 8 and 9am on the Saturday.

The previously thorny issue of the flag schedule was submitted for approval, with the inclusion of a flag flying for the Jubilee weekend being added prior to the resolution being adopted.

The Estates manager Rob gave an update on EPCs – Energy Performance Certificates on the rental stock held by the council. Four properties were missing EPCs, and this has now been corrected. One poorly performing property has until 2024 to be upgraded to a ‘C’ category, which he is undertaking.

The Committee Structure and Working parties plan was discussed briefly, with the decision made to keep the currently dormant Grants working party, anticipating future use.

Cllr Holder next spoke on the Michaelmas Fair 2022, giving an updated on the proposed September event. He spoke that the charter of 1652 gave the fair the right to hold the event, although in 1981 a deed which was updated included an entry that the fair is not actually covered under the original charter.

He further mentioned that he had handled the original charter, suggesting that it may be better stored in some fashion.

Some further discussion regarding the fair was undertaken, with one of the key issues appearing to be the lack of submission of the request for the fair not having been accepted in the February as usual. 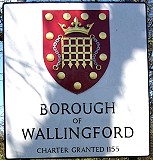 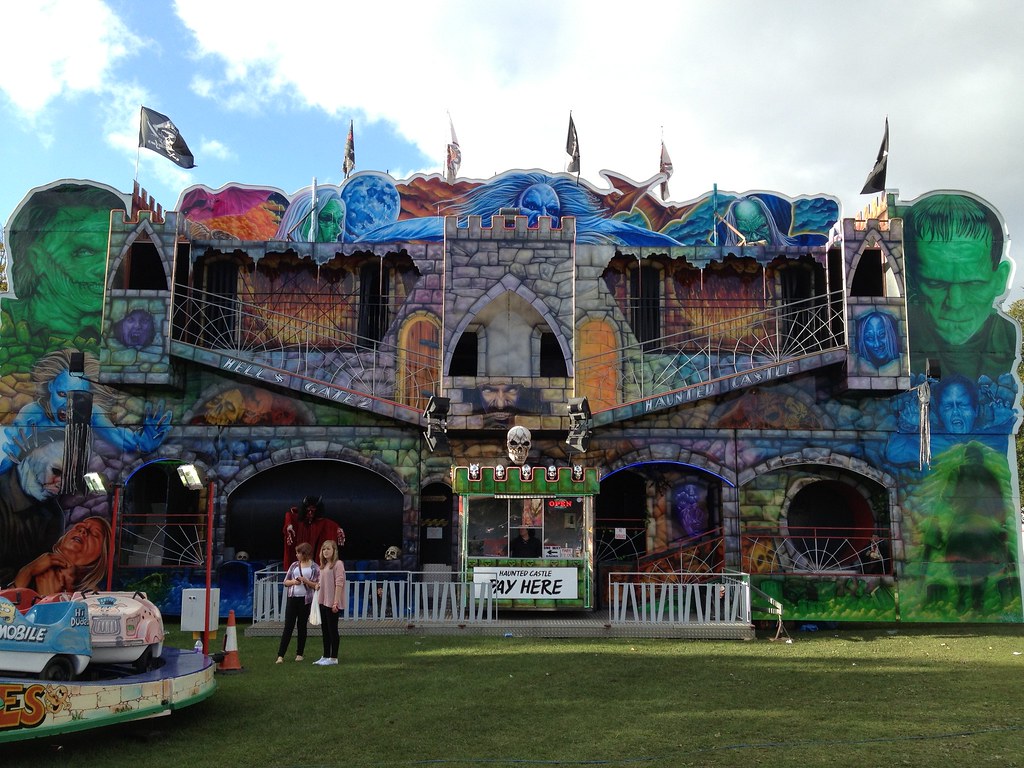 It was further mentioned that the council had previously visited the fair, with cooperative events in general having dropped off over the years. Further discussion regarding the receipt of paperwork from the providers was brought up.

Cllr Rob gave his opinion that the charter document itself remain in Wallingford.

Marcus drew the discussion to a resolution regarding if the town should renew its relationship with the showmans guild, or approach a new provider moving forward. Marcus suggested that the council attempt a renewal of the relationship for this year, before possibly reviewing after this year’s event. The outcoming being that this was adopted, thus the Michaelmas Fair will be returning as prior later this year.

It was further resolved that the council should seek conservation advice on how to display the original charter within the town.

An update on Public Liability thresholds for events was presented – this being the insurance required by other providers who host events on council land. The insurance was previously set at a level of £10m, and after having taken advice it was now suggested that this could be done on a lower level – £5m – for smaller events.
This was accepted, which will allow smaller events to have a suitable level of insurance in place without dissuading them taking place.

The council Jubilee celebrations have been planned for the 5th June at 1130 – 1530 in the Castle Gardens – this to involve a picnic, hopefully a school band, and more. More details to come in the future.

A three day event in the Town Hall will be held showing photographs from the history of the town, as well as hopefully a full 3 hr peel of bells possibly happening at the church.

Shops in the town have been asked to decorate their shopfronts, while the gardens staff have red white and blue flowers. More bunting has been ordered! 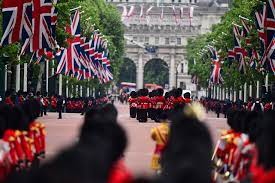 Following an update to the tree planting of the Queen’s Canopy – a tree planting scheme tied to the Jubilee was given, there was brief discussion of a scheduled visit from Luxeil-le-Bains, also timed for the Jubilee – Luxeil being Wallingford’s twin town in France, in the region of the Swiss / German border. Cllr Holder has also been in touch with the German city of Bad-Wurzach, which was twinned with the town in 2000. The upshot of the discussions being that the representatives of both towns are currently intending to visit the town during the Jubilee and Bunkfest. Concern regarding the potential cost of hosting a visit has been expressed. 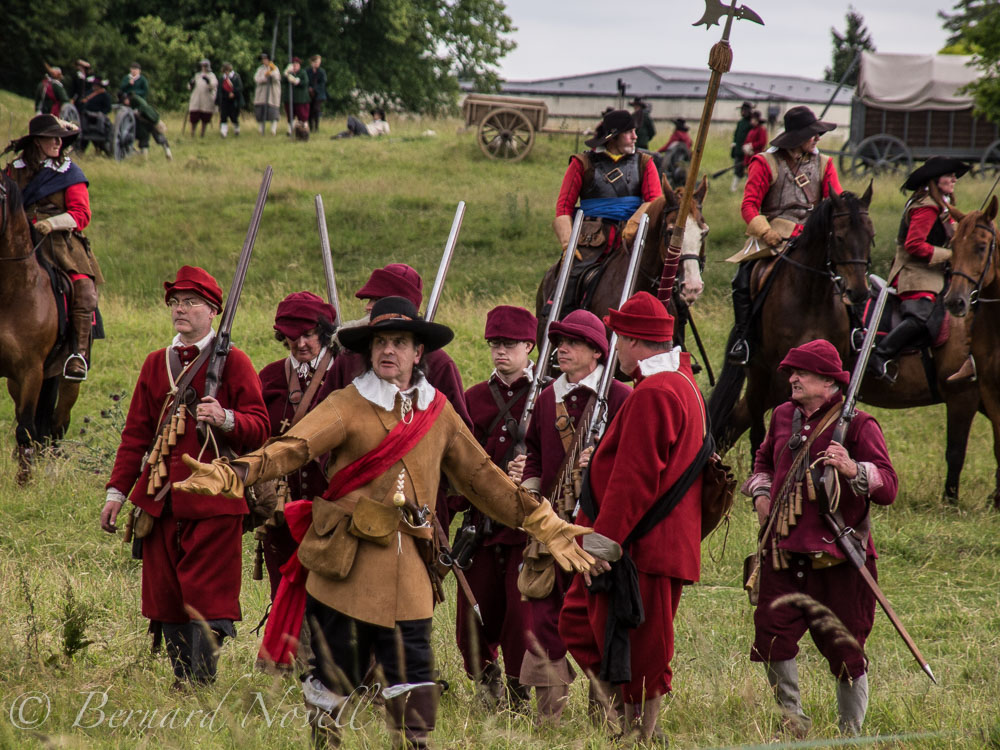 Having rattled through the meeting, now only at 20:06, we move to an update on the Civil War Re-Enactment, this running to a response from SODC / The Earth Trust suggesting August or September this year for any event. Given the expected lack of availability from the society, it was suggested that they be invited to a Council meeting in order to get the event booked in. It was also highlighted that the battle was in July, thus being the ideal time of year in regards to the participants.

With further discussion not being productive, the matter was put off for Marcus to meet with the parties involved and to come back with further information.

The Accessible Boat Club was discussed next, with Cllr Deborah relating that the boat has now been given permission to moor at the Boat House. It was also noted that Greene King are inspecting the stairs to the riverside for any subsidence.

An update on the Castle Gardens reopening was presented, with an expectation for this occurring in April. Roughly 10m of fencing needs to be erected in order to make the site safe, with the Estate Officer talking though some of the available options. He requested an amount of funds to build the fence (ahead of the other Castle Ruins fundings) in order for the gardens to be made safe and to open. The cost of up to £5000 was requested, if necessary in the event that some existing Harris fencing not be available. This request was passed.

The Wigod Way Family Center lease and service agreement was reported as having moved forward, with a view to this being signed and agreed with the centre in short order. This would include a quarterly report from the center.

Some brief recommendations from committees were adopted – the update to the allotment agreement, an increase in the annual charge at Castle Yard Car Park, a response to the South and Vale’s draft Joint Design Guide, as well as an update to the Wallingford Neighbourhood plan monitoring template. All of these were passed in relatively short order. 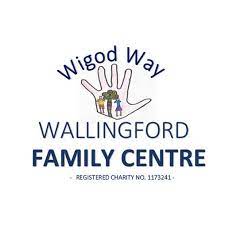 Finally the council received a recommendation from the Bull Croft Trust, which would allow the Trust to spend £25-30,000 on professional fees.

At that point, the meeting covered some possible upcoming agenda items, before the public and press were asked to leave, allowing confidential items to be heard. Thus at 20:29 the three remaining members of the public departed.

This article is not intended to be taken as minutes of the meeting, and is a story based on our attendance at the meeting. Any mistakes are our own, and this article is intended for information to the wider public. 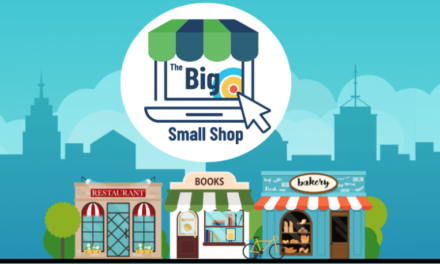 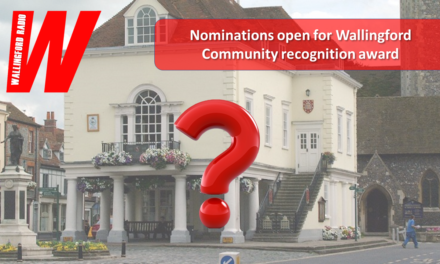 Keeping cars on the Road 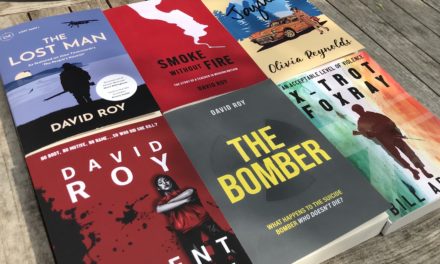